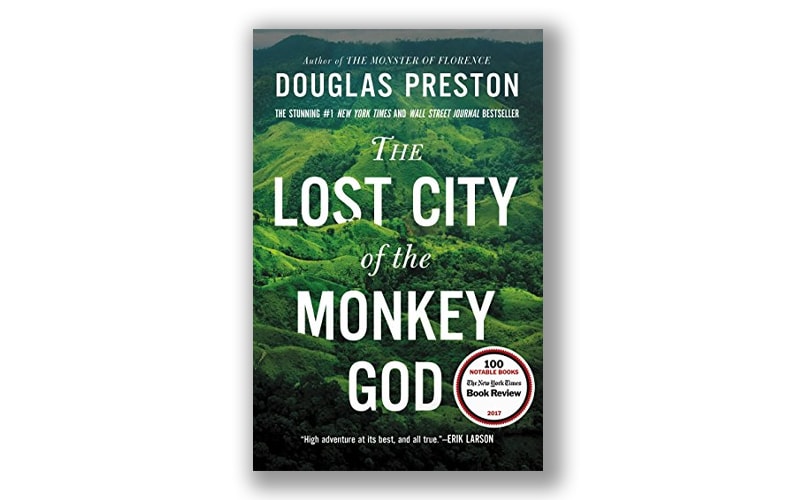 Lost City of the Monkey God: A True Story by Douglas Preston

On Tuesday, August 18th, the Deercreek Book Club will meet to discuss Douglas Preston’s book, The Lost City of the Monkey God: A True Story. This book is the absolutely true, eyewitness account of one of the great discoveries of the twenty-first century.

Summary: The #1 New York Times and Wall Street Journal bestseller, named one of the best books of the year by The Boston Globe and National Geographic: acclaimed journalist Douglas Preston takes readers on a true adventure deep in the Honduran rainforest in this riveting narrative about the discovery of a lost civilization – culminating in a stunning medical mystery.
Since the days of conquistador Hernan Cortes, rumors have circulated about a lost city of immense wealth hidden somewhere in the Honduran interior, and they warn that anyone who enters this sacred city will fall ill and die. In 1940, swashbuckling journalist, Theodore Morde returned from the rainforest with hundreds of artifacts and an electrifying story of having found the Lost City of the Monkey God – but then committed suicide without revealing its location.

Three-quarters of a century later, bestselling author Douglas Preston joined a team of scientists on a groundbreaking new quest. In 2012 he climbed aboard a rickety, single-engine plane carrying the machine that would change everything: lidar, a highly advanced, classified technology that could map the terrain under the densest rainforest canopy. In an unexplored valley ringed by steep mountains, that flight revealed the unmistakable image of a sprawling metropolis, tantalizing evidence of not just an undiscovered city but an enigmatic, lost civilization.
Venturing into this raw, treacherous, but breathtakingly beautiful wilderness to confirm the discovery, Preston and the team battled torrential rains, quickmud, disease-carrying insects, jaguars, and deadly snakes. But it wasn’t until they returned that tragedy struck: Preston and others found they had contracted in the ruins a horrifying, sometimes lethal-and-incurable-disease.
The Deercreek book club meets every 3rd Tuesday of the month, at the Club. Before the discussion, beverages and light snacks are served. For more information, please contact Chris Middlebrook, middlebrookchristine@gmail.com or cell 407-461-o756